Growing up I was never much of a military history buff. In high school I remember my teacher drawing maps of the German Blitzkreig on the floor and thinking, "Man, the janitor's going to be ticked!" and not being drawn in much more than that. In fact, I remember listing Brady Bunch episodes with a substitute we had in that class almost as much as the regular teacher as he tended to his moonlighting career as mayor of the local munipality. Between myself and the substitute we managed to come up with 84 of the 117 episodes.

Most of my knowledge of the conflicts of the 20th century have come from the few tidbits that seeped in combined with a steady diet of Hollywood war films. The opening 20 minutes of Saving Private Ryan I will never forget like I did the remaining two hours the second I walked out of the theatre. Apocolypse Now still haunts me with its creepiness. Letters From Iwo Jima is way better than Flags of Our Fathers. 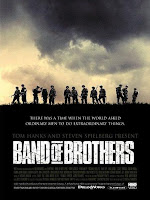 But my favorite war film in recent years is the epic mini-series Band of Brothers. Despite being made for cable, Band of Brothers seems to be a benchmark in WWII films. It's consistently among the top sellers on Amazon despite having been out for years. I'm sure the ever-dropping price has something to do with it, but garbage doesn't sell in volume unless it's in a bin at Walmart marked "$1.89." As the title suggests, Band of Brothers is so powerful not because of the attention to costume details, sweeping scenery or massive battles. It's great because it looks at the human side of legendary Easy Company.

The real-life Band of Brothers will soon be immortalized on cardboard as part of Canadian manufacturer iCardz's upcoming dual series America at War: WWII. America at War: WWII will package two sets in one box, kind of like 2001 Topps Traded Baseball or 2008-09 O-Pee-Chee Update Hockey. Band of Brothers is one focus, while D-Day is the other. Both will have similar designs but by breaking the sets in half iCardz will be able to tell separate stories.  This also enables iCardz to expand the Band of Brothers series in future sets that will focus on other aspects of WWII. 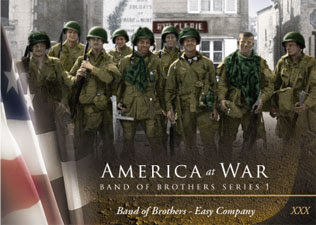 In total both sets will have 192 cards. Card fronts feature a mix of action and portrait photography as well as several artistic renditions. And although card backs are a somewhat neglected part of the hobby, iCardz prides itself on the informational possibilities of their cards. I know I'd rather learn about history sorting through cards that ploughing through another assigned reading from a bland textbook.

Each box of America at War: WWII promises complete base sets of both Band of Brothers and D-Day. There's also some extra goodies to chase. Each box will also have at least one autograph from a Band of Brothers veteran. A total of 2,000 cards have been signed for inclusion in packs. The autograph list includes:

Other inserts include sketch cards from Ingrid Hardy and instant win cards for WWII memorabilia and limited edition prints from Valor Studios. 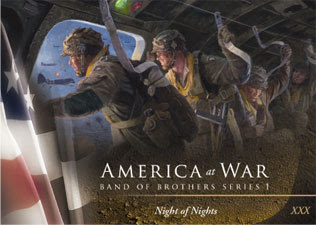 Please note that the above images provided by iCardz are prototypes. The Buck Compton pictured is not of his actual autograph as they are waiting upon the arrival of the actual cards, so the final autograph might look a different signature-wise.
Posted by Ryan Cracknell at 9:08 PM
Labels: America at War, America at War: WWII, autographs, history, iCardz, non-sport

I like this idea. I have always been a military history buff and appreciate seeing REAL heroes given a cardboard tribute

Thanks for the heads up - I have received signatures from many of these men TTM, and I will definitely be picking up a set.

I'll be grabbing a Canada D-Day one as well.

This is definitely an autograph set I'm going to collect... I love this mini-series.

An old post, but just to let you know as a fellow collector, iCardz is now offering a master set that includes all SEVEN Band of Brothers autographs: