Lord Stanley is Noble and Shiny 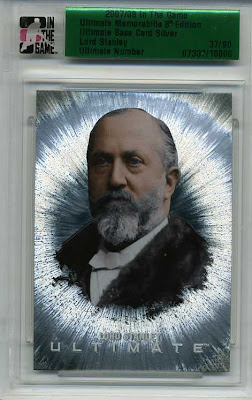 This is a pick-up from a few weeks back that I grabbed while looking for something a little different. I believe I grabbed something I was looking for initially but I'm a sucker for combined shipping deals and often end up grabbing a couple of extras.

The card in question is a 2007-08 In the Game Ultimate Memorabilia 8th Edition base card (I think) of Lord Stanley, aka the guy the Stanley Cup's named after. And while I love the old-time photo mixing with the silver dufex-ish finish, there's a lot to be desired by the overall package:

1. First off, there's no number. What's a base set without a number?
2. Next, why slab a modern base card fresh out of the "pack"?
3. So the slab is serial numbered but not the card itself. Grrrr.

If you're not familiar with In the Game, they're a lot like the Donruss equivilent of hockey. They had a license, lost it went Upper Deck got the exclusive rights yet they've continued to produce cards and survive. Note this card shows how not to get sued: it shows a picture, no logos and a bowtie. No confusion there. In the Game also gets around the rights issue with minor league and international league deals.
Posted by Ryan Cracknell at 7:52 PM
Labels: 2007-08, collecting, Donruss, hockey, In the Game, lame ideas, Ultimate Memorabilia

Yes, I watched a Simpsons DVD recently. So what?