A couple of days ago Topps released some images for 2010 Allen and Ginter Baseball via their Twitter stream. Now they've released the initial information for the whole shebang. At first glance, the formula hasn't changed much, but this is a set that has always delivered some quirky surprises and I suspect they'll return.

The base set will once again consist of 350 cards: 260 veterans, 30 rookies, 25 historic figures and 35 champions. The checklist didn't indicate the traditional 50 short prints, but I'd be shocked if they weren't there.

In the relics department, the addition to the formula are Book Cards. These are those hard-to-display hinged cards. Each card, numbered out of 10, will include two autographs and two jersey swatches. The basic Framed Relics game-used checklist contains 66 cards.

The freaky hair cards return once again with DNA Relics. The checklist is certainly an intriguing one:
How one goes about certifying the hair of Charles Dickens, I don't know.

Coming off the success of the Woolly Mammoth hair card and the various nature cards from Upper Deck's Champs and Goodwin Champions comes Monsters of the Mesozoic relic cards. Dinosaur fossils! These relics will be limited to ten copies each. Topps will also be continuing the Logo Man manufactured patch cards.

The Framed Autograph checklist is big, running 85 cards. Sure there's regulars like Ryan Howard and David Wright, but color me most intrigued about the autograph of "The World's Largest Collection of the World's Smallest Versions of the World's Largest Things" (that's how the card is listed on the checklist). I'm guessing it has something to do with this. Other non-Major League Baseball folks on the autograph checklist include:

I couldn't find definitive info on Dale Davis, Gary Stewart, Max Poser and Robert Scott. So if anyone wants to enlighten us, please do. Many of the autograph signers also have relic cards as well.

Rip Cards return offering the prospect of some nice goodies should the owner dare to tear. Oops, that was the tagline for Pinnacle Zenith more than a decade ago. Rip Cards will fall one per case and individual outer cards will be numbered to no more than 99 copies. Inside there's the possibility of the following:

Each box of Allen and Ginter will also have one box topper from the following: 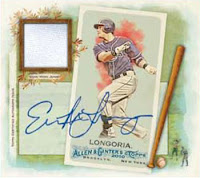 My personal favourite part of Allen and Ginter is the wacky inserts. I just recently finished my 2008 World Leaders set and am now looking at moving onto the National Heroes from last year's set. These inserts have always intrigued me as they're not terribly tough to find, can be found at a decent price and there's often nothing quite like them. Basic inserts fall one per pack.

This Day in History is a 75-card set that pairs a baseball player with a significant event that happened on their birthday. The 15 Baseball Highlight Sketch cards will probably look nice but are something of a yawn compared to the remainder of the inserts. Unless, of course, they're actually original sketches this year and not something copied with a 1/1 label like they were a few years ago. Other sets include Lords of Olympus (25 cards, 1:12), Monsters of the Mesozoic (25 cards, 1:12), World's Greatest Wordsmiths (15 cards, 1:24), National Animals (50 cards, 1:8), Sailors of the Seven Seas (10 cards, 1:24).

Finally, there's 10 Cut Signature cards and the return of the Allen & Ginter Code. It'll be curious to see if it takes more than a day or two to crack it this year.

2010 Allen and Ginter Baseball is schedule for a June 21 release.

Well, I'm excited this year because I somewhat like this look so far! Last year it looked ugly when pictures were first released, and 450 cards later in my collection and it's awesome! So, that should be good news for this year!

Ok, that does it. I'm collecting the mini base set and the inserts.

Lords of Olympus?! That is sweet!

If those odds are correct, that's 9 mini inserts a box. Add in the A&G backs and the black borders and such and over half the minis in a box are going to be an insert or parallel. Not complaining, mind you...

Sign me up for a Shawn White and Sig Hanson auto!

i don't believe there is shawn white... it's shawn johnson

I took the autograph list from the first checklist posted. Either it was changed or I boo-boo-ed, in which case I apologize.

I broke a box of 2010 Allen and Ginter over the weekend at Dick and Jane's Sportscards in Jacksonville, FL. I pulled the Albert Pujols Framed Auto in Blue Ink. Best pull of my life. I have a couple of questions about the card that you might be able to answer. First, what is the production run of this card? I heard it was 10. Also, Beckett does not list the value bc of scarcity. What would be your estimate of the value of the card in NM-MT condition? Thanks!

Congrats on the nice pull. In the past it has been the red autographs that are limited to 10. I don't think Topps released any production numbers this year. As for value, I don't keep track of that sort of thing much. If you're looking to sell it, a completed auction search on eBay would be your best bet. One finished a couple days ago a touch under $600. Wow!